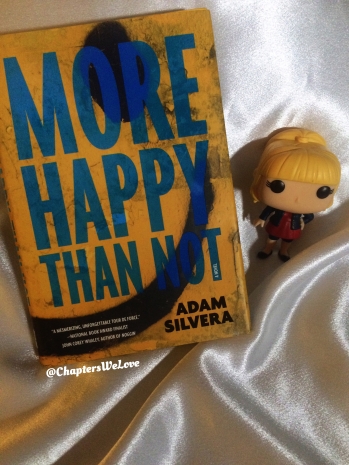 The Leteo  Institute’s revolutionary memory-relief procedure seems too good to be true to Aaron Soto-miracle cure-alls don’t tend to pop up in the Bronx projects.  Arron could never forget how he’s grown up poor, how his friends aren’t there for him, or how his father committed suicide in their one-bedroom apartment.  Aaron has the support of his patient girlfriend, if not necessarily his distant brother and overworked mother, but it’s not enough.

Before beginning my review, I just want to state this story deals with suicide, depression, self-harm and sexuality.

The story is about a 16-year-old boy named Aaron Soto, he lives in the Bronx with his mother and older brother.  Aaron not able to deal with his father’s suicide and facing other difficult times in his life decided to try and take his own life, but failed.  At the beginning of the story we get the everyday life of Aaron with his friends and his girlfriend Genevieve, how they spent their time and all the games he plays with his neighborhood friends.  One day Genevieve leaves to go to an artist camp for three weeks leaving Aaron alone, and while Aaron was playing a game similar to hide and seek he meets Thomas a boy from the next neighborhood.  Thomas doesn’t have any friends around his neighborhood so him and Aaron become friends.  Now this is where the story begins to unfold for Aaron.

The plot of the story has to do with memory.  The characters were all great, flawed and humanize.  I love the friendship between Thomas and Aaron and the sweet loving Genevieve, both were there for Aaron at all times.  His mother of course was very supporting of him from the very beginning, his brother also, having to live in a poor neighborhood and live in a one-bedroom apartment didn’t really say much.

The reason why I didn’t give this read a full 5 stars was because even though I like that the story was told in parts ex. Part One, Part two, Part Zero, I felt kind of confused at the beginning and the story really didn’t pick up for me until Part Zero and that was around page 170, that is more than half of the book.  But once everything unfolded it made perfect sense.  I have to say I LOVED IT and will recommend for everyone to give it a look.

Overall, it was a great read Adam Silvera did an amazing job humanizing all the characters and the dialogue was perfect!

If you are planning on reading this book just wanted to let you know this part of the review will contain a little bit of spoilers, so proceed at your own risk.

While spending time with Thomas, Aaron starts feeling attracted to him and starts questioning his sexuality.  Once Genevieve returns everything has changed and he doesn’t feel the same way he did for her before she went away for three weeks.  He decides to speak to his mother and tell her the truth about his sexuality and he is surprised to see how supportive she is of him.  This story talks about an institute where they can erase your memories and Aaron asks his mother for help, he’s a minor and will need her consent before going thru with the procedure.  Aaron’s friends notice the changes in him and they decide to beat Aaron, when this happens with all the blows he receives Aaron ends up in the hospital.  Aaron remembered all the memories that were taken from him when he had the procedure done.  This is a very interesting concept.  Aaron’s brother even though he didn’t get to say much was at the end very supportive and protective of Aaron.  One thing I didn’t like was Aaron’s relationship with Collin is it just me that thinks Collin only wanted him for sex???? But the rest of the characters even the ones that beat the crap out of Aaron were portray very nicely.

2 thoughts on “MORE HAPPY THAN NOT by Adam Silvera”