Soul of the World, Book 1 of The Ascension Cycle

As the fires of revolution rage…

The city simmers with discontent.  Civil war looms.  Sarine, a young street artist, cares only about surviving and staying one step ahead of the law.  Yet her hidden powers draw the attention of both aristocrats and revolutionaries, and soon she will have to decide whose side she is really on.

And Chaos spread across a continent…

On the battlefields, Colonel Erris d’Arrent mus lead her soldiers agains the armies in the south.  Yet the enemy seems to know her plans even before she makes them.  Erris needs to find out how, but the truth will be far darker than she could have imagined.

In the forests, Arak’Jur wields an ancient magic that keeps his people safe.  Yet the prophecies that have always guided his people have become corrupted, and conflict between the tribes threatens everything unless he can find a way to prevent bloodshed. 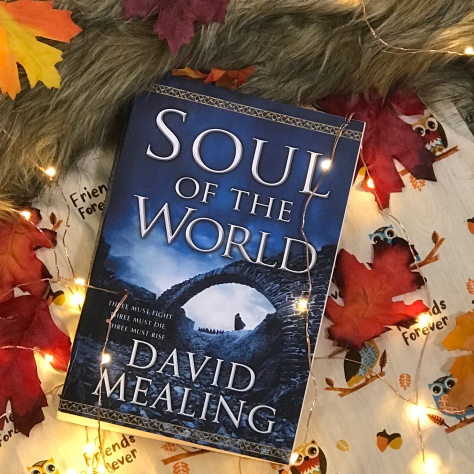 Soul of the world is a new epic fantasy series with a very interesting magic system and strong female characters.  The story takes place in a world similar to ours divided into two colonies Sarresant and Gand.  These two colonies are at war to get more land and magic power.

The story follows three POVs.  Sarine an artist leaving in New Sarressant and she has two different types of magic Leyline magic and Kaas magic which is a magic that uses some type of lizard or dragon I’m not sure what the thing is, its’ some type of reptile that she can borrow magic from it when need it.  Now Sarine hides her magic since they are not allow to use it unless the king allows it.  The second POV we follow is Erris d’Arrent a military leader and leyline magic user. And the third character we follow is Arak’Jur that used ancient magic called Spirit magic he protects his tribe in the forest from the beast and the more beast they kill the stronger their magic becomes.

This was a very dense and slow read for at least the first half of the book.  I found it to be a bit confusing and I couldn’t understand what Sarine magic companion was. What kept me going was the fact that this was buddy read with Tina over at Never Ending Bookshelf and Michael over at Bitten by a Radioactive Book and they answered some of my questions because the first half of the book I was kind of lost but, once I reached that part of the book things started getting interesting for me and I’m looking forward to read more once the sequel comes out.

Overall, this was a good interesting read, slow the first half it has interesting characters and magic system.  If you are new to fantasy I say start with The Lightbringer series by Brent Weeks and move up from there.

Thank you to the Publisher for providing me with a copy of this book, in exchange for a review. ALL OPINIONS ARE MY OWN.