Wake of Vultures (The Shadow, Book 1) 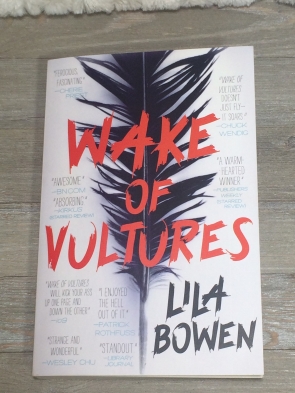 Nettie Lonesome dreams of a greater life than toiling as a slave in the sandy desert.  This is all she knows, until she survives an attack by a stranger and is awakened to the sinister truth of the world around her.

This is the first book in The Shadow Series by Lila Bowen (aka  Delilah S. Dawson). It’s a western fantasy story that follows Nettie Lonesome a mixed-race slave girl half African-American and half Native-American. She was taken in (adopted) by a white couple that never called her a slave but was treated as one when they had her working their farm all by herself.  Nettie referred to them as Mam and Pap.  One night Nettie was surprised by a stranger who attacked her but she ended up killing him and she is surprised when he turns to sand.

After killing the stranger Nettie starts seeing strange things, and learns that the world is full of strange creatures like a chupacabra, vampires, shapeshifters and plenty more.   Nettie dresses like a boy and struggle with gender identity.  She joins a group of  Rangers that fight the supernatural and she goes by the name Rhett.  Nettie learns soon enough that she needs to fulfill her destiny if she wants to be free.

I have to say my only con with this is that it got a little dragging towards the middle of the story, but overall the pace was good.

I wasn’t expecting this story to be a western fantasy story, I knew there was going to be paranormal stuff and I was looking forward to reading it and I wasn’t disappointed at all.  The characters were well developed, the world building was very unique and the writing was magical.

This story deals with some very heavy topic but it was done perfectly. I really can’t find any wrong with it and recommend it for all the diversity.  One of the things that got my attention was the dedication page and it read as follow:

This one goes out to #WeNeedDiverseBooks

Ganstagrass, and everyone who bucks the binary.

Overall, this was such a great read and I already have book two waiting to be picked up.  I do recommend it if you like vampire hunters, dark stories and a story full of diversity. Oh, and did I mention this book comes with a beautiful Map Of Durango Territory, Well, it does. 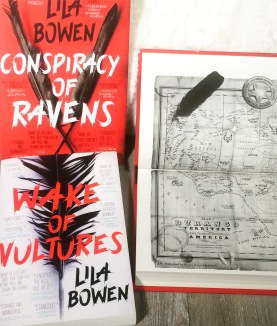 Thank you to the author and Orbit books for providing me with a copy, in exchange for a review. ALL OPINIONS ARE MY OWN.

2 thoughts on “Wake of Vultures by Lila Bowen”